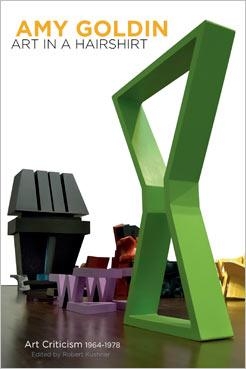 Over thirty of Goldin's extensive list of writings have been selected by Robert Kushner and coupled with insightful accounts from these prominent art world writers:

This book represents the first-ever collection of essays by influential art critic, Amy Goldin, taken from the pages of Artnews, Artforum, Art Journal, New American Review, International Journal for Aesthetics and Art Criticism, Art in America and her personal journals during the 60s and 70s. Robert Kushner, artist and a founder of the Pattern and Decoration Movement, has assembled this selection of essays written by Amy Goldin whose critical writing inspired many American artists. Her unconventional acceptance of "new" art forms paired with a close visual analysis of art from other cultures immediately challenged the traditional method of teaching art-history in the classroom and paved the way for broader parameters within the definition of art.

As a New York painter in the early 60's, Goldin studied with Hans Hofmann and was painting as Amy Mendelson. Goldin, however, made a transition from Expressionism and exhibited her own hard edge abstractions. She began writing art criticism in 1965 and is now well known for her thought-provoking essays on art and artists, bringing together ideas that reflect her absorption in historical and contemporary art forms, her understanding of philosophy and sociology, her empathy with paint and painters and her argumentative nature. In the early 70's as the recipient of a National Endowment Critic's Grant she studied with noted Islamicist, Oleg Grabar at Harvard and was awarded the Frank Jewett Mather Award conferred by the College Art Association for "Distinction in Art and Architectural Criticism during the Year 1974-1975."
Back To Top