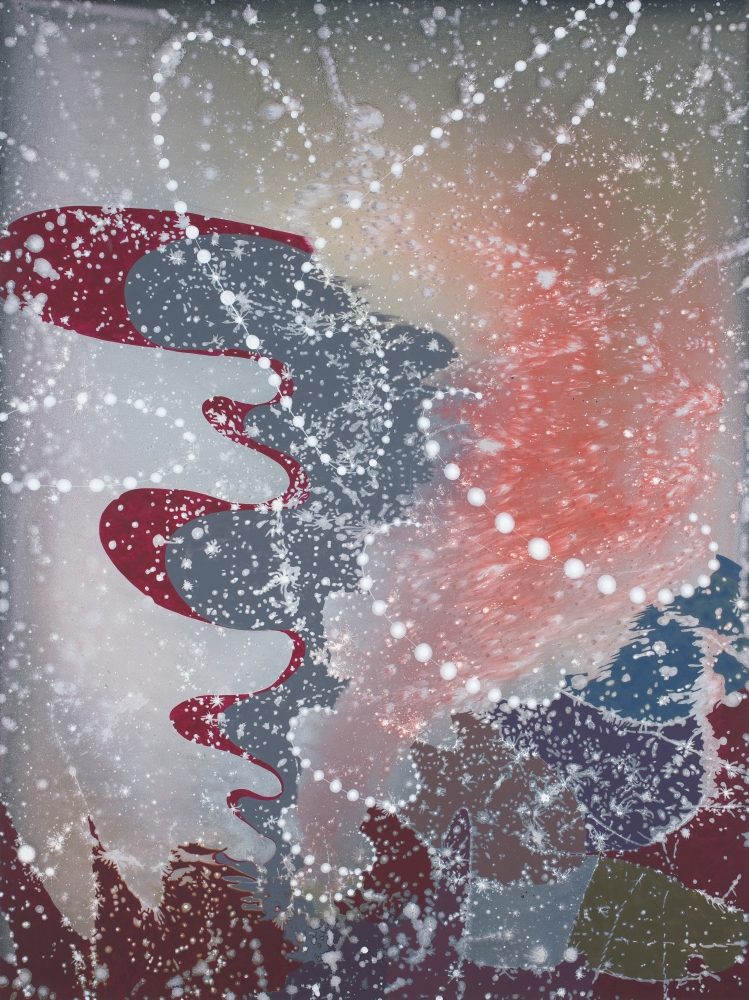 Stars, Constellations, the Heavens....
Celestial bodies have inspired artists since the European cave paintings where the first known
images of the sky appear. Sky gazing, starry nights, contemplation of the universe were staples
of the Renaissance and have continued to be explored to this day. This exhibition gathers five contemporary abstract painters whose work interprets the sky and its the stars in fresh visual language.

Alison Hall
Giotto’s Arena Chapel with its vaulted ceiling of stars has been the inspiration for Alison Hall’s
work for many years. Using the same renaissance techniques that Giotto employed in his
frescos, Alison's deep blue panels with hints of graphite mark her heavenly grids, her panels
shimmering in monochromatic depth.

Warren Isensee
Warren Isensee's hard edged constructions employ the grid as well as utilizing bright bold marks, exactly executed, inviting the viewer to find fresh interpretations of the manner in which we perceive stars. Unlike the other artists, his stars exist out of the sky, not within it - yet the are of the spirit of the sky, as truly as the rest.

Douglas Melini
Douglas Melini’s remarkable collages piece together mottled shapes and tones of paint allowing
his stars to rest upon or peek through his permutations of blue. His is a unique and personal space; those who spend time with these works will be justly rewarded.

Carl Ostendarp
Carl Ostendarp’s work, as that of Alison Hall, was inspired by a specific moment in art history.
Virgo is one of six paintings Carl made of water sign constellations, the paintings’ sizes are
exactly those of six 1968 works by Joan Miro, Letters and Numbers Attracted by a Spark, the
swirling motif of which is perhaps as reminiscent of the heavens as is Carl’s reconsideration.

Barbara Takenaga
Barbara Takenaga reconfigures space, our space, into fresh environments - an entire cosmos
can be contained as small as a sheet of paper. And although her paintings are worlds of their
own they somehow reach out and become ours as well.

Together, the five different artists present five contemporary interpretations of our heavens,
constellations, and the stars. They are their thoughts of journeys throughout art history and
their starry new ones.