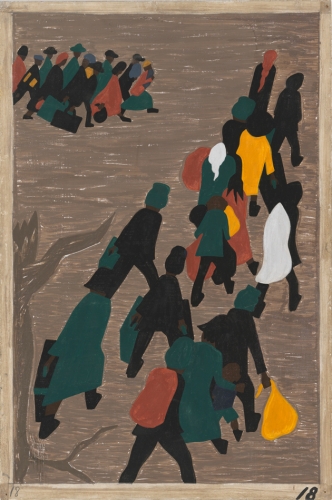 In celebration of the 100th anniversary of the birth of one of this city’s most beloved artists, Jacob Lawrence, the Seattle Art Museum presents Jacob Lawrence: The Migration Series. Acclaimed as Lawrence’s masterwork, this epic series chronicles in words and pictures the exodus of African Americans from the rural South to the industrial North in the decades after the First World War.

Jacob Lawrence was born in Atlantic City, New Jersey in 1917. His parents migrated from the American South to the North during World War I. He was one of the first African American artists to be represented by a major commercial gallery and the first to receive sustained mainstream recognition in the United States. He exhibited regularly in New York throughout the 1940s, 1950s, and early 1960s, when many other African American artists were denied professional consideration.

He has been the subject of many major retrospective exhibitions and his work is represented in hundreds of museum collections. A devoted teacher most of his life, Lawrence accepted a tenured position at the University of Washington in Seattle in 1971 and retired as a professor emeritus in 1986.

Lawrence was actively painting until several weeks before his death on June 9, 2000.

Thanks to the generosity of the Museum of Modern Art in New York, and The Phillips Collection in Washington, D.C.—the two museums that jointly own the series—all sixty panels will be shown together for the first time in two decades on the West Coast.