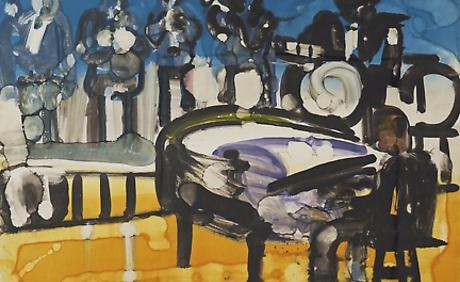 In celebration of the exhibition Five Works from the Collection of Albert Murray, Paul Devlin and Greg Thomas will explore the multifaceted relationship that Murray, the well-known writer, poet, and jazz and literary critic, has with art and his longtime, collaborative friendship with Romare Bearden. In a two-man verbal jam session, Greg and Paul, writers and experts on Murray’s work and thought, will discuss his essays on art, creativity, and the creative process, as well as his writings and published statements about Bearden. They will also consider Murray's Smithsonian interviews with Charles Alston and Hale Woodruff, Bearden’s and Norman Lewis’s Spiral group colleagues, as well as the ways in which Murray's thought relates to the works in the current exhibition.

Albert Murray’s many writings focus on African American culture and experience while always situating it as central to American culture and history. His innovative prose is known for its syncopated rhythms and is widely appreciated as among the most successful attempts to pair the style and sensibility of jazz with the English language.

Paul Devlin's essay "Albert Murray and Visual Art" appeared in the book Albert Murray and the Aesthetic Imagination of a Nation (University of Alabama, 2010). He is the editor of Rifftide: The Life and Opinions of Papa Jo Jones, as told to Albert Murray (University of Minnesota, 2011). Paul’s writing has appeared in the New York Times Book Review, Slate, The Root, San Francisco Chronicle, Antioch Review, and the Smithsonian's Archives of American Art blog, among other publications and postings. He is in the Ph.D. program in English at SUNY Stony Brook and has lectured about Murray's work at Auburn University, Tuskegee University, and at the Mobile Public Library, Alabama.

Greg Thomas's essay “Greg Thomas and the Professor,” which appeared in Albert Murray and The Aesthetic Imagination of a Nation, elaborates his personal relationship with Murray and the profound effect of “Cosmos Murray” on the course of his intellectual development. In addition to penning regular jazz features for the New York Daily News, he has a jazz blog at the Integral Life website, where in 2011 he published a series of essays with Murray's ideas at the center, such as "An Integral Take on the Blues Idiom" and "Folk, Pop, and Fine Art: Albert Murray's Lines of Cultural Development." In 2008, Greg lectured on Murray's aesthetic at the National Jazz Museum in Harlem. A journalist for more than 20 years, Greg has written for the Village Voice, Salon, Callaloo, and The Root, among other publications.
Back To Top