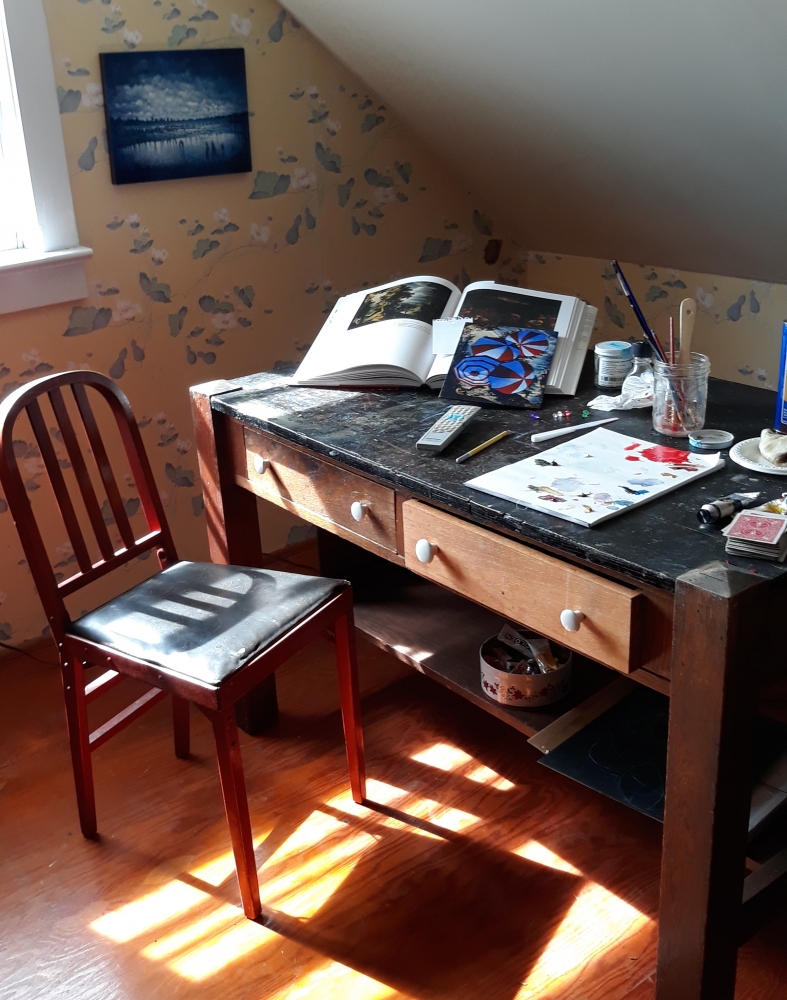 Self-isolation is something I normally experience, especially during the winters. My studio is located   in another house down the street and when the weather becomes particularly cold and/or stormy, I cannot rationalize heating up a whole house just to work on a little painting. Early this winter, within the house I live, I decided to set up a seasonal studio in the attic. Emptying out the attic, spackling and painting the walls was another matter, but completely satisfying.

I painted the flat hollow core doors to the studio to appear paneled. With the stairs just steps from my bedroom, it's so private. The steps going up are steep. A selection of books and objects rest at the top.

Being higher up, it's also quiet and the room has a view of its own. One can see the rooftops of the homes facing the beach. Looking down, I see our birdbaths and the woodshop in our backyard.

With a sense of liberation, I turned my focus on my interest in figures as part of an urban setting, to a natural one, the beach. I imagined the summer months with masses of people adrift in a profusion of umbrellas, all patterns and colors. I painted rather quickly to capture these effects.

The colors and patterns became like symbols for people and I could group them at will. In bunches, like flowers, or as leaves caught up in a whirlwind.

I began to compose the umbrellas more carefully in smaller groups, and with the use of chiaroscuro light they quieted down and felt introspective. I approached them like a portrait, or a small group portrait, with just a hint of a background and place.

Then, those umbrellas full of air and adorned with symbols, reminded me of ships sails. The backdrop in the works developed as well, as I incorporated passages drawn from Old Master paintings.

There are distant mountains, a castle overlooking a ravine, an arched bridge over a winding river, a fox hunt, a satyr teasing a goat. The old world. The sails drifting forward...

Soon the umbrellas became the subject and I was letting the figures fall away.