Gallery Talk:
Wednesday, October 1 at 6 PM
Please join us at the gallery for a conversation between the artist and John Zinsser.

DC Moore Gallery is pleased to announce the opening of Sempervirens, which marks painter Claire Sherman’s New York solo debut with the gallery. A catalogue with an essay by Joe Fyfe will be available.

Gestural and heroic, Claire Sherman’s canvases investigate the confusion of scale and space. Purposefully composed in a single day, each composition originates from a specific place and a finite period of time, rendered in sweeping lines and impasto paint. Sherman intentionally retains all of the stumbles, victories, and awkward brushstrokes that lay tangled on the surfaces of each heavily worked canvas.

The physical nature of Sherman’s painting method is heavily influenced by references she draws through her extensive travel and eclectic reading. Joe Fyfe describes in his catalogue essay, “Sherman’s landscape pictures demonstrate an awareness of this semiotic distinction in the very tenuousness between the originating site and its depiction. Sherman makes no bones about how a landscape site can be a stand-in for a psychological state, a romantic scene, or a historical convention, but is ultimately an archetype.”

Curious about both the semiotic fracturing of language as well as the courageous adventuring of 19th century female travelers, Sherman reads the works of William Faulkner and Cormac McCarthy as carefully as she does the iconoclastic journaling of Isabella Bird. She describes: “My work is frequently influenced by literature – my recent dirt paintings represent a space from underground, looking out. As William Faulkner imagines sequences of As I Lay Dying from the perspective of Addie, the deceased matriarch, my paintings relate to the idea of being outside a narrative looking in.”

Subjects central to this exhibition are the giant sequoias of the southern Sierra Nevada, as well as the California coastal redwoods. Sherman attacks her subject, wrestles with it, and renders it with enormous strength. She hopes, “to disrupt the idealism of imagery through the construction of marks together: image and expectation are disrupted by paint. Spaces crumble and fall apart, creating tension between the painted surfaces only to decompose, disintegrate, and settle into ambiguity. The choreography of paint in my work is meant to create a visceral chaotic reaction rather than remaining a mere representation of experience.”Sherman graduated in 2005 with an MFA from the School of the Art Institute of Chicago, and received her BA from University of Pennsylvania in 2003. She has completed residencies at the Terra Foundation for American Art, The MacDowell Colony, Yaddo, and the Lower Manhattan Cultural Council’s Workspace program. Her work is in numerous public and private collections. Sherman lives and works in New York City. 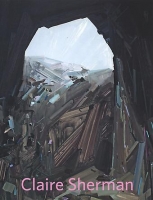